Every time me and my friends sit down to carve Halloween pumpkins, our gourds turn out kinda gnarly and unrecognizable if we attempt anything besides your average jack-o’-lantern (granted, we are never not drinking copious amounts of wine during.)

Other people actually put a lot of time and effort into their creations. These are the people I have infinite respect for, since spending more than 45 minutes on crafting something that will rot within days is quite a thankless task. Less thankless now that people are able to profit off their creative pumpkins in the form of Instagram likes and Reddit karma, but still fairly thankless. More power to ’em:

17. This cast of iconic faces:

16. And this Pennywise, red balloons and all!

14. This TERRIFYING Buffalo Bill “it rubs the lotion on its skin” recreation:

13. Also this pumpkin, recreating the scene from The Walking Dead in which Negan smashes Glenn’s head: 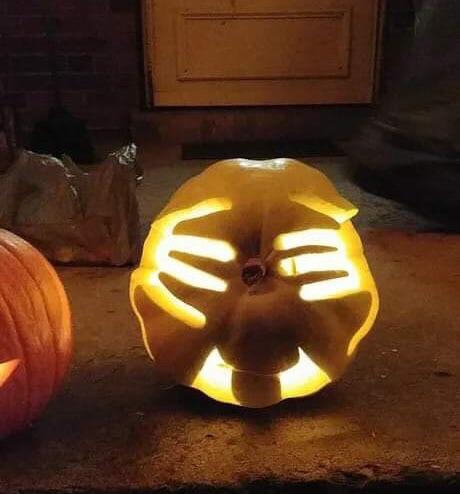 6. This pregnant pumpkin giving birth to a little pumpkin baby:

5. This pumpkin chowing down on his lil pumpkin friend:

1. And, finally, the scariest pumpkin of all: