Every time I watch a kids movie from my childhood, or even new ones, I’m always catching adult jokes that I never noticed. It’s like the creators of the movies are leaving little Easter eggs for the adults who have to watch the movies with their kids. It’s no fun if there isn’t something to entertain the adults in the room, right?

Here are 25 of the funniest adult jokes in kids movies that you may have missed. 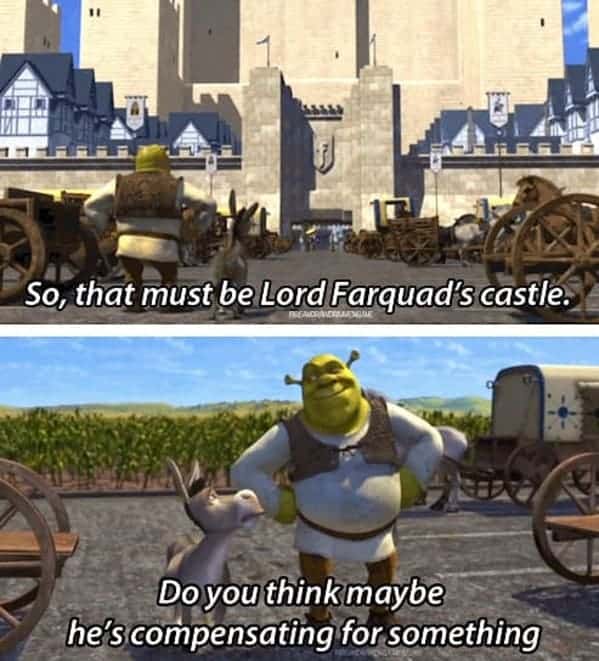 “When Shrek and Donkey are looking up at Lord Farquaad’s castle, Shrek says ‘Do you think maybe he’s compensating for something?’ and gives a little chuckle and nudge toward Donkey.” 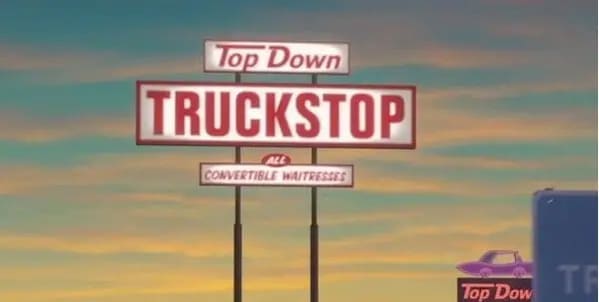 “There is a billboard in the background of one scene advertising a truck stop with an ‘all top-down convertible’ wait staff.” 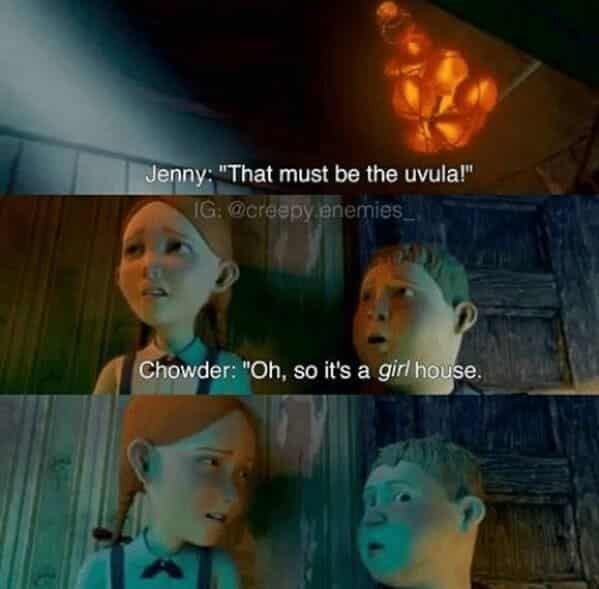 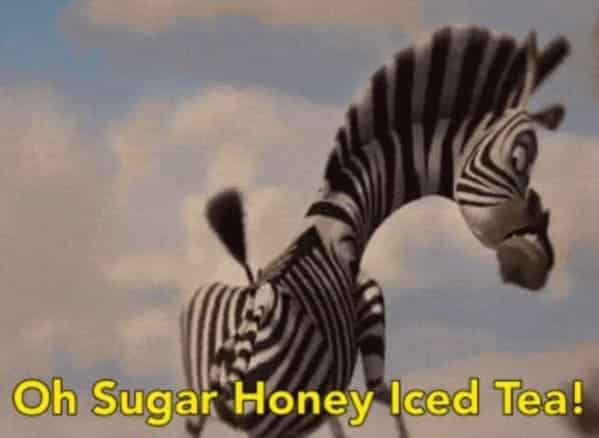 When Alex the lion was running from Marty on the beach yelling ” sugar honey iced tea!” (An acronym for shit) 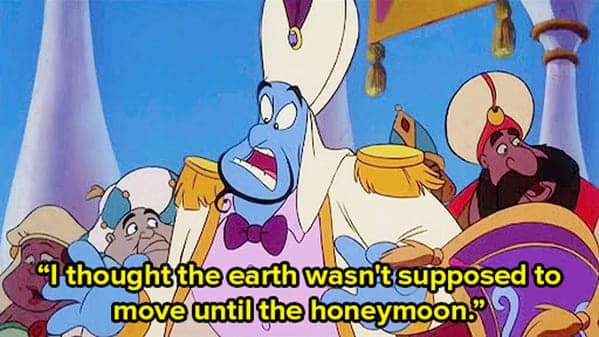 “After a stampede of animals, the Genie says, ‘I thought the Earth wasn’t supposed to move until the honeymoon!'” 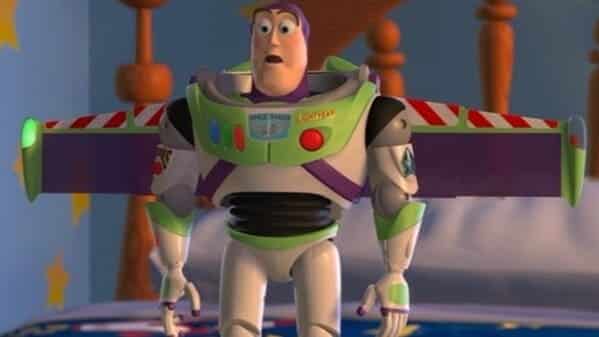 “At the end of the movie, after Jessie performs a stunt to open the door, Buzz gets ~excited~ and his wings pop out.”

When Linguini is trying to admit to Collete that Remy is helping him under his hat and says, ‘I’ve got a little, tiny…’ and, for a split second, she looks down at his…you know.”

“There’s a few adult jokes in this kids movie, but specifically when Mrs. Doubtfire is trying to intimidate Pierce Brosnan’s character and make him uncomfortable at dinner. Mrs. Doubtfire keeps saying things like how he needs to be up for a bit of the ‘cunning linguistics,’ and how he’ll be up against a bit of competition in the bedroom, as Sally Field’s character has got her own ‘personal jackhammer.’ Definitely all stuff that went WAY over my head as a kid that I then picked up on when re-watching it recently!” 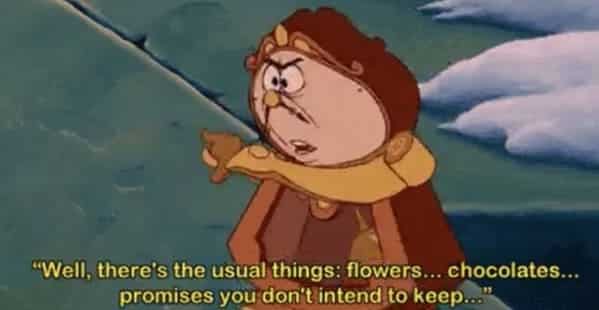 “When the Beast decides he wants to do something for Belle, but doesn’t know what, Cogsworth says, ‘Oh there’s the usual: flowers, chocolates, promises you don’t intend to keep…'” 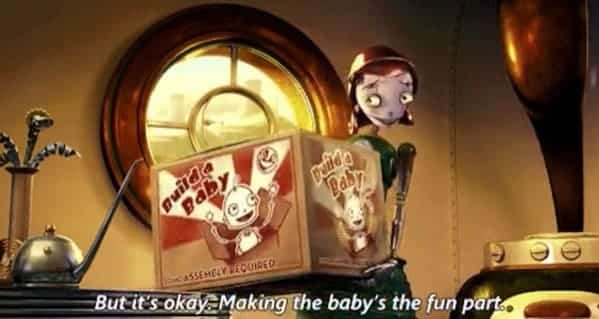 “In the opening sequence, they say, ‘Making the baby is the fun part.’ It’s so perfectly framed to go over the heads of kids.” 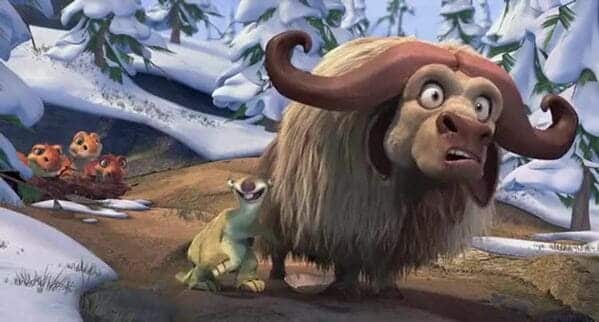 When Sid the Sloth tries to get milk from a MALE bull and starts to run: ” I thought you were female!” 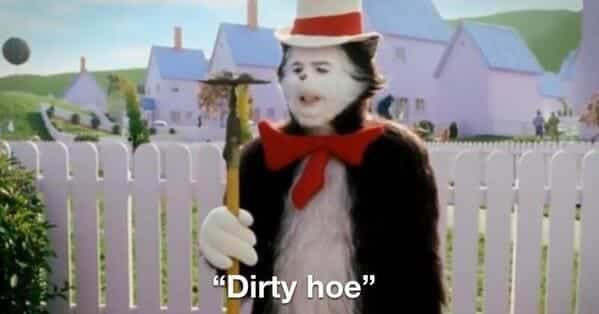 This scene gets me every time. 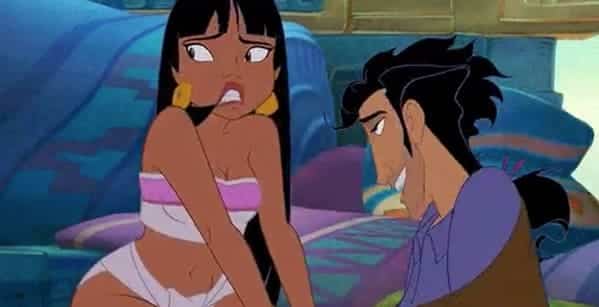 “I maintain that there’s a blow job scene in this movie…she was nowhere NEAR his face when she popped up.” 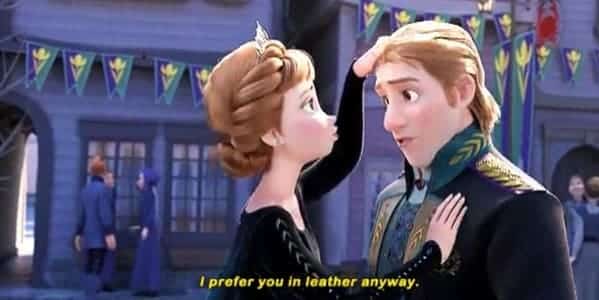 “At the end when Anna is made queen and Kristoph is all dressed up, and she says that he looks nice but that she ‘prefers him in leather.'” 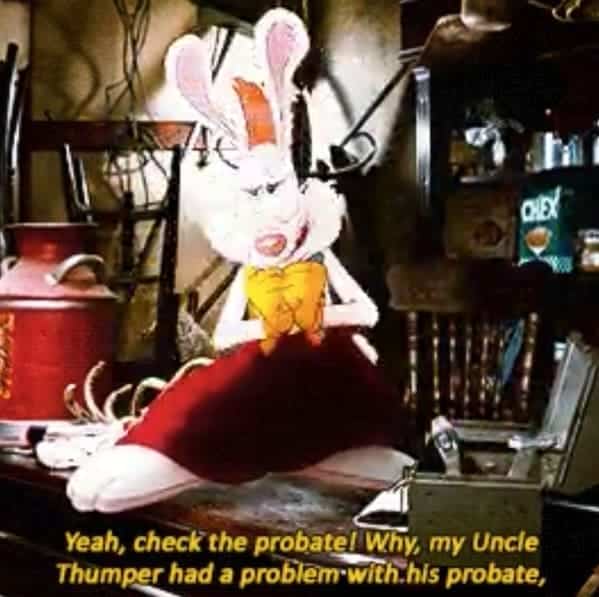 “Eddie (to Dolores): You go downtown to the courthouse and check the probate.

Roger: Yeah, check the probate! Why, my Uncle Thumper had a problem with HIS probate, and he had to take these big pills, and drink lots of water!

Eddie: Not PROSTATE, you idiot! PROBATE!” 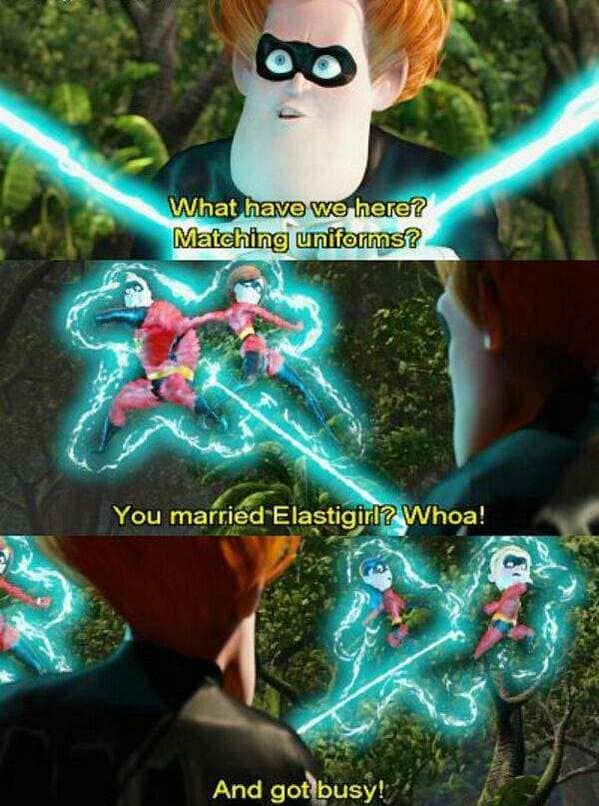 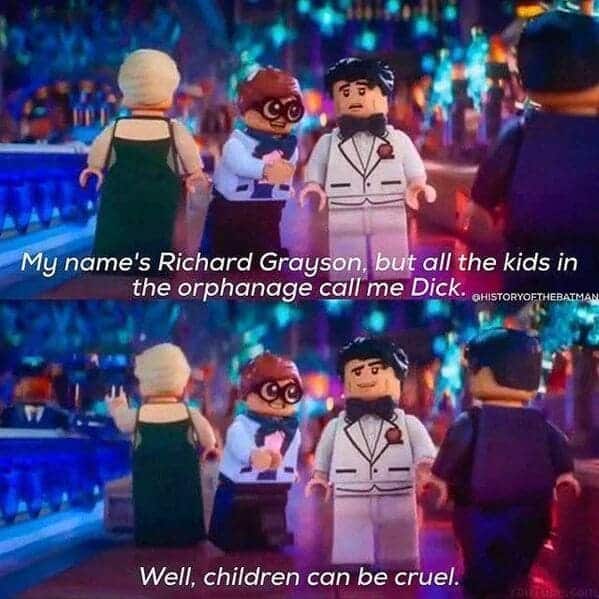 Dick Grayson: “The kids at the orphanage call me Dick” Bruce Wayne: “Well, children can be cruel.” 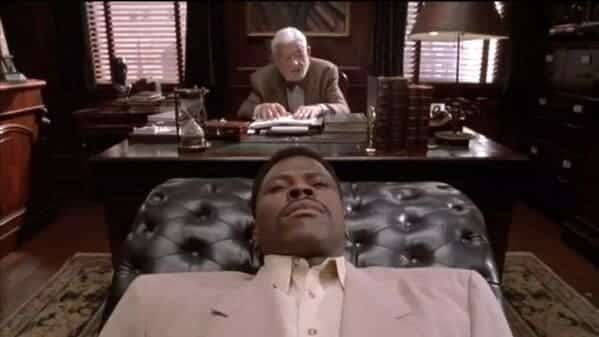 “Patrick Ewing is on the couch at a psychiatrist’s office explaining how all his basketball skills are gone and he says something like ‘I can’t perform.’ Then, the psychiatrist asks him if he’s suffering any other…performance issues. Ewing sits up and indignantly says, ‘No!’ and the psychiatrist says, ‘Just asking!’ My sons were like, ‘What’s so funny?’ when I was laughing. They truly were too young to understand.” 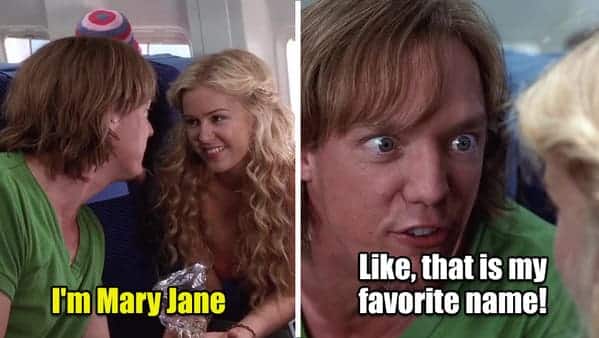 “Shaggy’s sitting on a plane next to a gorgeous blonde who he takes an interest in, and she says, ‘I’m Mary Jane…’ to which Shaggy replies, ‘That’s my favorite name!'” 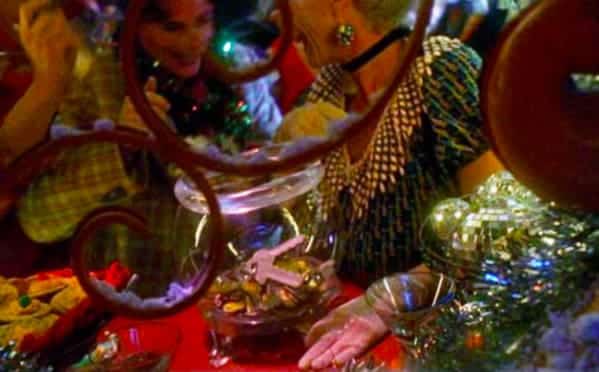 “There is literally a swinger’s party happening where they’re all putting their keys in a bucket. I asked my mom about it when I saw it in fourth grade, and she said ‘Oh, they’re putting their keys away because they’re drinking and shouldn’t drive home!’ That made sense to me until a few years ago.” 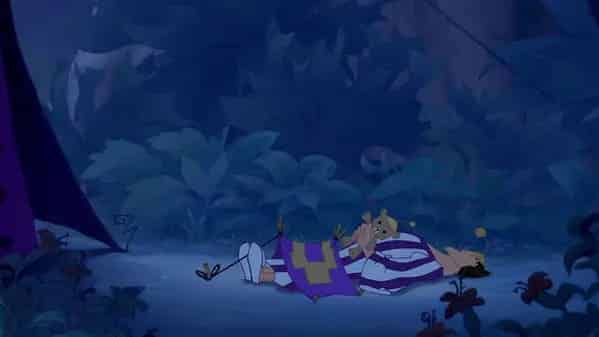 “Kronk is sleeping on the ground at one point and he has a tiny tent pitched over his crotch.” 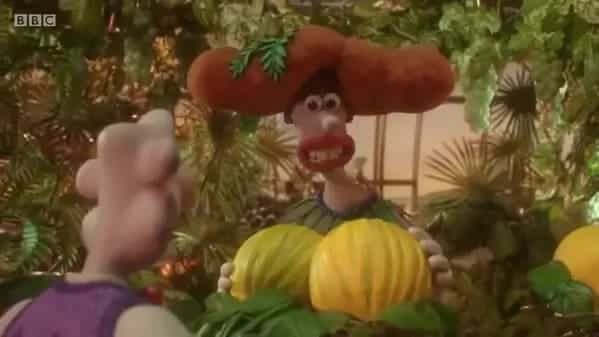 “The heroine is walking in her greenhouse. She faces the camera with two giant watermelons between her and the camera at chest level. She seductively caresses them and says something about ‘my melons.’ I almost fell out of my chair laughing while my kid looked at me like WTF? In the row behind me, another dad/son was having the exact same reactions. The other dad and I saw each howling and it caused us to laugh even more. There were other loaded scenes in that movie, as well!” 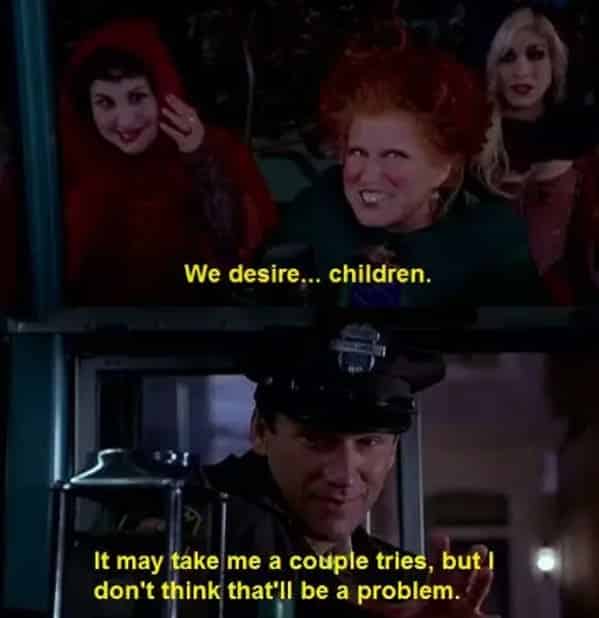 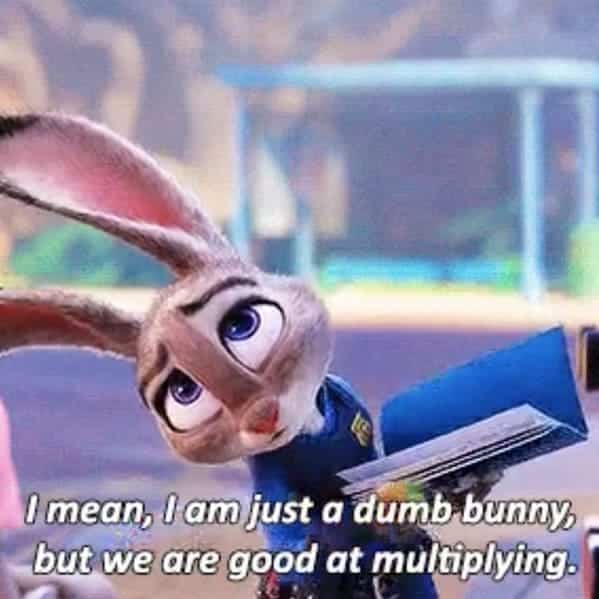