Celebrities…they’re just like us! They go to the gym, the movies, and go to the airport. You never know when you’ll cross paths with a random celeb.

A wholesome celebrity encounter is the best because they’re nice about it and take a moment to chat or take a pic. You never expect to bump into a celebrity while you’re out and about doing everyday life stuff, but it happens. These random encounters are a good reminder that celebrities normal people too.

I’ve only ever had one random celebrity encounter. I was walking home from the grocery store and out of nowhere, I ran into Jeff Garlin. He asked me for directions and we talked for a few. It was awesome and totally random because I’m standing in the street with a bag full of groceries. I wasn’t ready for that, but it makes for a fun story, I guess.

If you have a random celebrity encounter to share, let us know in the comments!

“He walked into the bar I was at and, luckily, the 711 next door sold bananas. Walked back into the bar and told him I had a really awkward picture request and he was more than happy to oblige. Really nice guy.”

2. “Two years ago I met Chris Evans while deployed to Qatar. As we wait for the trailer for (possibly) his last Marvel movie, I want to publicly thank him for everything he’s done for this franchise. Thanks, Cap!”

“First thing I told him was that I loved his work as The Human Torch. He laughed and was a good sport about it. He went around and shook every Soldier’s hand and had dinner with some folks afterward.”

3. “Met the nicest guy while playing soccer in Toronto. I was a little too excited I think.”

“I was playing a game of soccer and Dinklage and Adam Sandler were walking by with some kids. Sandler was heckling and making funny comments about the game. In response to those who think it’s silly to get pictures taken with celebrities, I think to each his own. I admire Mr. Dinklage and I personally think he is a superb actor and I love his character on Game of Thrones. I had a chance to express my appreciation for his work which I think he appreciated in return. I didn’t ask for a picture with Adam Sandler because it’s Mr. Dinklage that I was so excited to meet. I’m a girl btw… Soccer attire and excited face…guess I need more makeup when I play!”

4. “My brother and I met our favorite superhero (The Hulk) when we were 4. We were pissed off because Lou Ferrigno wasn’t green.”

5. “So yesterday I met my hero Dave Grohl and took a selfie with the Foo Fighters. The tour manager nearly killed me.”

“[The manager] was just quite strict and I guess only has the band’s best interests at heart. But when he saw that they were happy he actually took my big camera and took a photo of me taking the selfie. It was quite sweet.”

7. “Met one of my favorite actors today!”

8. “I also recently met a Ghostbuster”

10. “I met Brie Larson working the night shift at my local AMC”

11. “My buddy met this strange dude wearing a dinosaur shirt and zebra pants.”

13. “My friend’s face when she met Bryan Cranston…”

14. “I met Jack Black tonight. He looked into my eyes and said “it’s like looking in a young mirror”.”

15. “Just met Steve Buscemi and told him he was a Reddit legend and he wasn’t sure what that meant but he said he was happy about it!”

16. “Last Night I Met Jeff [Goldblum]. We were on a night train to Prague and had some drinks. We ended up in one wagon and were talking and getting softly wasted.”

17. “My dad sent me a picture of my mom and the “nice young man” at their table at a charity dinner last night.”

19. “A friend met Beyonce in New Orleans, she said ‘Whatever face you make, I’ll make.'”

22. “I Met Forest Whittaker In Uganda”

“He walked by me and my friends and we were like wait for a second that’s Forest Whittaker but when we were walking over to ask him for a photo one of the staff where we were said not to bother him. So we went back to eating. Before he left he walked up to us and said it would be okay for a photo now. It was really cool to meet him.”

“I was there to help Father’s heart mobility charity which works in Uganda. Fathersheartmobility.org for anyone interested in donating etc. He is there for a documentary about the last Rhino sanctuary.”

23. “Met [Arnold Schwarzenegger] At The Gym. Gave Me Props For Being Female And Doing Frontal Raises” 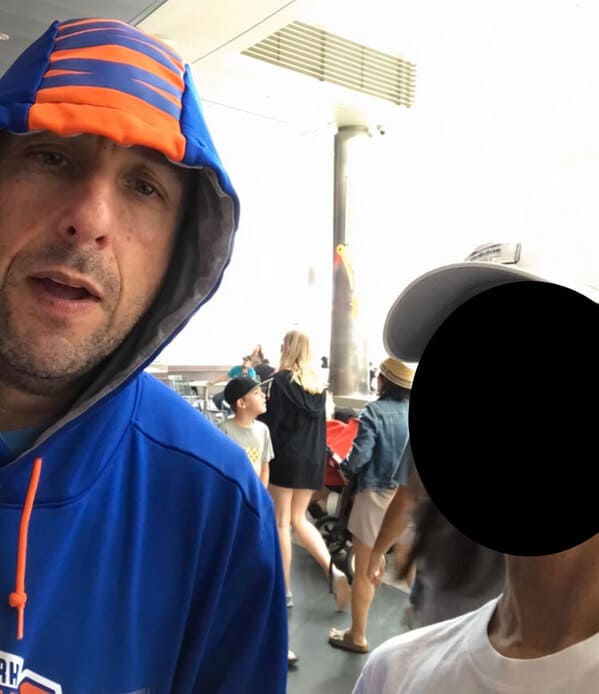 “I tried not to be obnoxious and made it really quick. He said thanks, bro.”