History is written by the victors, sure. But, it’s also written by regular people who read a lot and have no other qualifications.

Frankly, if you want to learn from history, you also have to read a history book or two. Or, talk to an old person (which is not as fun as reading).

Someone on Reddit asked fellow history buffs a question: “what is a commonly held misconception that drives you up the wall every time you hear it?”

The nerds, it seems, had answers.

Here are the people who History buffs wish everyone knew more about:

1. American independence could have gone either way.

“Only around 40% of colonists supported the American Revolution. Another 40% was indifferent, and about 20% sided with the British. Most Americans think that it was the vast majority who wanted Independence.” –placeholderNull

2. Early humans had our brains.

“That people from the past were just less intelligent than modern people. Fact is, humans from even 15,000 years ago were just as intelligent as modern humans (intelligence being the ability to learn and apply knowledge). They just had different things to worry about and had not discovered everything that we know today.

The whole of modern civilization is built on discoveries made thousands or tens of thousands of years ago. Our ancestors, starting with nothing but stone tools and basic survival skills, created agriculture, writing, mathematics, standardized language, the wheel, metallurgy, ship building, architecture, trade routes spanning all of afro-eurasia, currency, banking, cross breeding of animals and plants to create better strains, the list goes on.” –Ralife55

According to several sources (e.g., eyewitness accounts) his warning was likely “the Regulars are coming out” or some variation of that and probably not loud enough to wake up a village (as I’ve seen in some media renditions).” –Animalion

Actually the vote was a pretty clear majority in favor of execution.” –Poorly-Drawn-Beagle

“People seem to think peasants only ate bread and potatoes with no seasoning. In reality, while salt was indeed a luxury they often couldn’t afford, they had access to plenty of herbs to flavor their food. They also had access to things like fish and other meats, so they weren’t just eating bread, though it was an important staple of their diet.” –Balrog229

6. RIP to our distant brothers and sisters.

“That Neanderthals were monosyllabic brutes. There’s no evidence of that whatsoever. Their brains were bigger than ours and casts of the inside of their skulls show that they had all the same structures our brains had. Their tool making was comparable to any Homo sapiens’ took making (at least before the Great Leap Forward) and they lived in communities just like we did.

We also regularly mated with them and had kids, which I really don’t think we would if they were little more than quasi-gorillas.” –PhillipLlerenas

7. What the movie Gladiator got right and wrong. 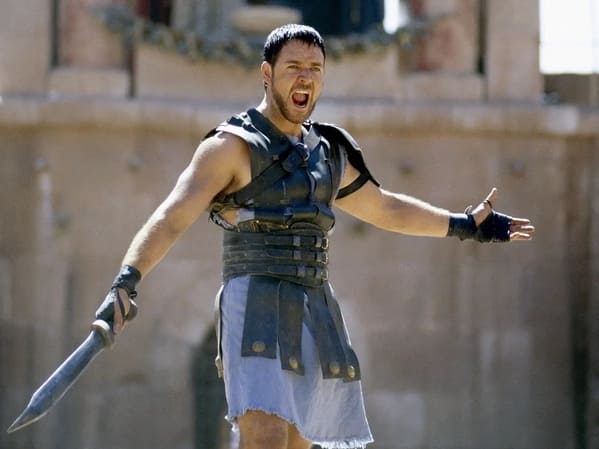 “Roman gladiator fights usually weren’t just pointless, bloody, fights to the death for scumbag convicts. The gladiators themselves were very highly trained celebrities who were very well looked after. It was entertainment done for show, much like WWE or similar today.” –_spookyvision_

8. Not every wedding is the same.

“That if you were a Peasant you could marry who ever you wanted for love and if you were a noble, royal or the like you could only marry for power During the Medieval period.

Higher class people could and did (though it wasn’t common) marry for love and most of the time Peasant marriages were arranged for the same reason as noble ones were, to link two families together, you very rarely got to marry who you liked it was usually who your parents liked.

Also Prima nocta has, as far as I know was never actually being recorded as a thing.” –Nugo520

9. Yes, old people existed in the past.

“People didn’t die at 30-40. The high infant mortality rate skews the average. If you could survive into your teen years you had a pretty good chance of living into your senior years. Obviously there are a lot of factors to consider(eg class, gender, occupation, where you lived, etc.)” –crazynekosama

“Just recently learned that Napolean being short was a slam campaign. And Hitler wasnt that short. About 5’9.” –escapefromnarcatraz

“Marie Antoinette’s famous “let them eat cake” or “let them eat brioche”. She literally never said it. She was 9 at the time and it was entirely made up.” –oamnoj

12. Storming of the prison holding 7 people.

When in actual fact there were only 7 prisoners. (4 cheques forgers, a lunatic, a sexual deviant and a man who tried to assassinate King Louis XV 30 years ago).” –Age-Zealousideal

“The myth about the Vomitorium.

The story goes that Roman nobility would go there to eat so much till they puked and would then continue eating.

It was just the name for the Colosseum entrance.” –Th3_Accountant

“That the American Revolution was fought between British soldiers fighting in lines and american colonists using all sorts of cover and walls and strategy that the British were too dumb to figure out. While there are instances of that, there are also instances of British troops doing the same thing, and of many (many) “set piece battles” where both sides would have fought in a “european” manner.” –youarelookingatthis

“That the Library of Alexandria was callously destroyed in a big, dramatic event in which all of the ancient world’s knowledge was lost forever.

Like most things, the Library of Alexandria had its rise, its peak, and its ultimate decline, with highs and lows in between. It also certainly was not the only prestigious library in the world at the time, not to mention personal collections kept by the wealthy. To act as if all of the world’s knowledge was recorded one time only and then stockpiled in one place is ludicrous.” –snickerdoodle–

“I’ve mentioned this before but the Earth was mathematically proven to be spherical by the Ancient Greeks in the 3rd Century BC. Literate people, at very least, wouldn’t have believed the Earth to be flat in the Medieval era.” –2ndOfficerCHL

“Germany invaded Russia on June 22, not “in the winter” as people say.” –Thirty_Helens_Agree

“That carrots magically make your eyesight better. I still hear people say this to this day. Carrots are good for you, but not any better for your eyes than any other vegetable.

In World War 2 when the Nazis were bombing Great Britain, they couldn’t figure out how the Brits were able to shoot their planes down at night. British propaganda stated that their gunners and pilots ate a lot of carrots to improve their eyesight.

In actuality they were covering up the fact that they’d invented RADAR and didn’t want the Jerrys to know about it.” –allmeatbopper

“CORSETS ARE NOT EVIL. They’re more comfortable than some of my underwire bras and they’re fantastic for back support and posture.” –HeyHeardAboutPluto

21. Einstein was good at math.

“That France is a weak nation. While they did surrender in WW2 the French resistance provided information and carried out sabotage that was extremely useful to the allies. They also have a long and storied military history fighting the English and Spanish. And the US owes its independence to France as they provided weapons, uniforms and training to the colonists as well as providing us with a Navy that could compete with the English Navy making it harder for them to land troops and equipment.” –Drakeman1337

“Cowboys were not cool white guys with endless independence!!! Cowboys were in fact largely black, Mexican, and Native American men who were in need of money and were seen on the low end of social hierarchy. Originally they used whips and dogs to control their herd. Eventually the lazo became the lasso, chaparajos became chaps, and the sombrero turned into the ten gallon cowboy hat we know today. Herding cattle was hard work and was beneath “respectable white folk”. Cowboys worked in groups of 12 or so to herd thousands of cattle over hundreds of miles, and they too had a leader called the trail boss. Cowboys were in fact not rugged icons of independence, but took orders like everyone else and made wages lower than skilled factory pay. Cowboys could also come as young as 12 years old.” –honeeyghost

“That people’s surnames were changed at Ellis Island. They were not.” –DepecheClashJen

“No, the Egyptians did not worship cats. They had a couple gods who resembled cats, but every one of their gods was associated with and often took the form of some sort of animal. They didn’t worship the animals, themselves.” –TheRealPyroGothNerd

“That the further back in time you go the more sexually suppressed everything was or the more racist everyone was or the more misogynistic everyone was – basically any perception that the entirety of history can be charted as a steady progression. All of these things fluctuate. Women in Medieval Europe had more rights than women in 18th century Europe, our concept of racial superiority based on skin color would have come off as insane in many other eras, and I want to tear my hair out every time I hear someone claiming that it would have been scandalous to show an ankle in 19th century Europe.

Hell, even in living memory none of these claims are accurate. The 70’s were more sexually liberal than the 80’s, and you would have to be dumber than a bag of shit to not see how much we’re backsliding on human rights right now, especially women’s rights – and yet people still overwhelmingly cling to the delusion that we’re constantly marching ever and ever forward on all of these issues, each day more progressive than the last. It’s just not true.” –schnit123

27. He actually said “What’s this? Violence against Ceasar!”

“That Ceaser said Et tu Brute when brutus stabbed him. its actually from the play by Shakespeare!” –Babywipeslol

28. America’s been around quite some time.

“We can prove that modern humans have been in North America at least 23000 years. The number keeps going up as more evidence is found. Yet people still cling to the “Asian Land Bridge” theory, which says that Native Americans only came here 10k – 15k years ago.” –Gitxsan