After reading this thread started by writer Ed O’Loughlin, or @edoloughlin on Twitter, I am sleeping with one eye open if I’m in a house with kids. They simply can’t be trusted. At a certain age, children have many of the skills necessary to do what adults can in relation to technology. Maybe even better, since we’re all dinosaurs. But they have much less impulse control. Beware and watch your Apple ID!

O’Loughlin says his youngest daughter hacked the parental control on Netflix with a very simple trick. She greased the buttons and when he input the code, she was able to see what four buttons got pushed. Then she tried all the combos later until she figured it out. 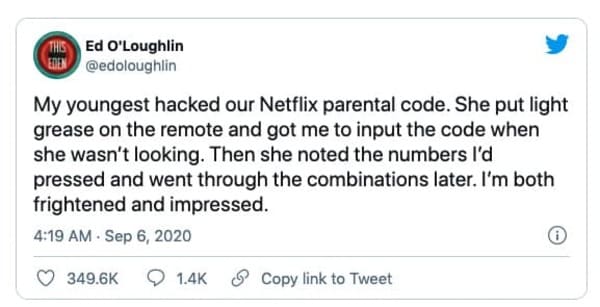 What was she so desperate to watch? Umbrella Academy, which he said elsewhere in the thread is something she’s allowed to watch anyway. She did it for the pure thrill of espionage.

Some parents said they set up these types of challenges deliberately, almost as a test or incentive for figuring out life: 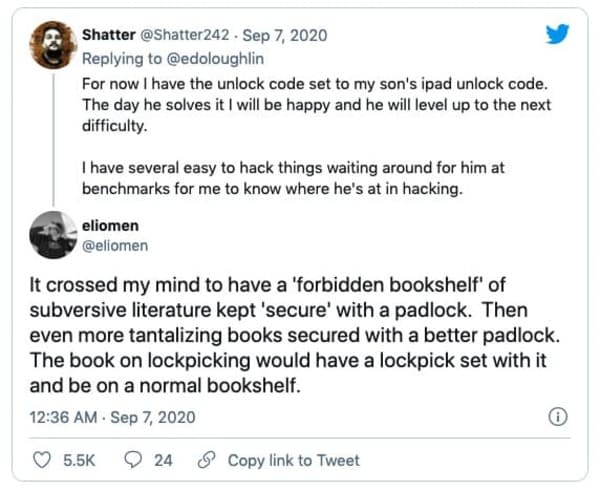 But a lot more have been completely bamboozled many times by their spawn. The replies were full of stories of crafty children pulling one over on adults. Some were both annoyed and proud of their own babies’ sabotage. Others bragged about what they got away with as kids. No one who reads these will ever underestimate a child again: 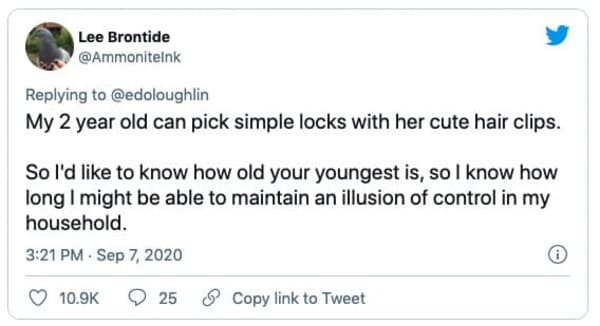 I shared this with my oldest daughter and she told me it reminded her of my younger daughter.

Apparently she once asked me for the access code while I was asleep, and I told her.

I do not remember this!

Our then-15 y.o. social engineered my husband by saying his phone wifi access didn’t work and using my husband’s phone to “check the issue”. He added himself as a wifi admin so he could disable restrictions each night. All summer he played games until 4am until I found him out.

Very, very impressive. My son ran two school planners – one with all of his good comments and one with his bad ones. Guess which one we got to see…?🤔

My nephew installed facebook, signed up himself and went live and his only 5 years..after being caught he said Instagram was tricky pic.twitter.com/bBao3N8Ab1

25 years ago, before internet, my son was 14. He lied about his age, ordered computer parts by phone and COD. The parts would show up before I got home. He built his own computer in our basement. I had no idea until his sisters let me know. He owns his own computer company now.

When my chn were 2&3 I put chocolate decorations near the top of the Christmas tree to stop them being eaten. One day I found my 3yo on a chair passing each chocolate down to my 2yo to put in a plastic bowl. I wasn’t sure whether to tell them off or praise their teamwork 😂.

Cut from the same cloth as my devious youngest daughter. She handed me the controls when I was sat with my back to the window at night so she could see the reflection. I think she was about 7 at the time. Now she’s 16 I sleep with one eye open.

My friend’s daughter took the iPad into their room for the unlock and recorded it on the family’s Mac in real time. My daughter told me and I thought it was too clever to rat her out. Kids are gonna find a way.

Ha ha. My old school trick for the many notes home for bad behaviour was to trace a map of Ireland on grease proof paper, add all the rivers and what not then grade it as an A+ exam then ask a parent to sign it. Voila traced signature at the ready!

the funny part is that I only found out when I discovered a bunch of 3″ square pieces of printed discard pages in cleaning out a random drawer. I had actually read enough of the novel to recognize it in order to go to my library of 1000s and find it.
— Cabarle (@sharperlee)